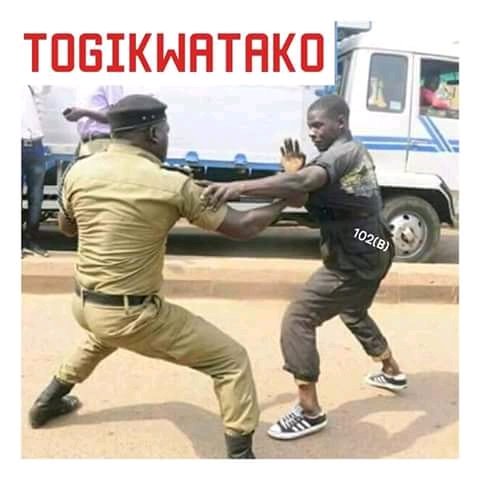 However, some of the ruling NRM party members brought the  suggestion of amending it a thing the opposition side did not buy thus starting up a campaign to stop it. Yesterday Thursday the 21st of September was the day the bill was supposed tabled in parliament but strangely, it was not appearing on the order paper for the day.

Despite that, Honourable members met although there was chaos inside parliament forcing the deputy speaker of parliament Jacob Oulannyah to adjourn the house until next week Tuesday the 3rd of October when the Age Limit motion will be debated.

With all that is going on and as we wait for Tuesday, Ugandans have also taken to social media to post sorts of funny things in the hash tag #Togikwatako and here are some of the posts below.

Get me a president who loves Uganda as much as this kid loves his cabbage. #AgeLimit #togikwatako pic.twitter.com/kjTptoqRpW

#togikwatako #AgeLimit
Parents :Our Kids are the future presidents

But why would some one force him self on people who no-longer need him as their leader? #PlenaryUg #AgeLimit #Bayimba2017 #togikwatako pic.twitter.com/aBMy2I8Odg

Abiriga and crew trying to understand how they lost round 1 of #AgeLimit #togikwatako pic.twitter.com/3PhqhyDAkc

Abiriga has many problems he even lost his fashion sense #AgeLimit #Togikwatako pic.twitter.com/nj577m7h49

#togikwatako dis lady thought they meant touching female genitals he really when has packaged it to the fullest #AgeLimit pic.twitter.com/auxcvyLkzh

When it's very clear that's it's one way and ur taking the wrong direction… #togikwatako #AgeLimit #AgeLimitUg pic.twitter.com/JYNAKTyjiI

#togikwatako caption this Anite & Abriga you are such a disappointment to people of Uganda – west nile pic.twitter.com/zhU3HRT00B