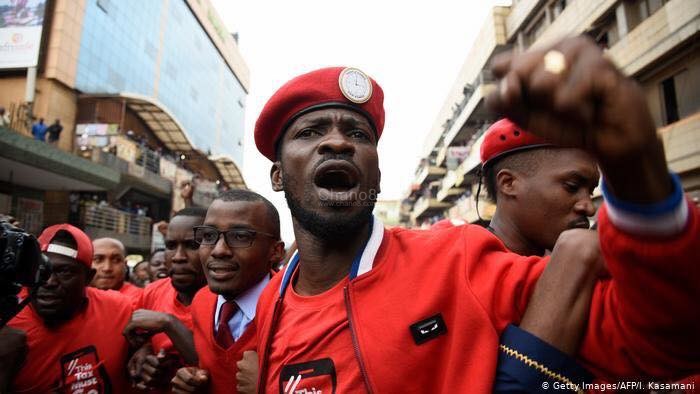 What might be perceived as a ‘tug of war’ between musician-turned-politician Bobi Wine real name Robert Ssentamu Kyagulanyi and Uganda Police is getting interesting every other day.

The Kyadondo East Member of Parliament shocked us when he disclosed that a total of 124 of his concerts have been cancelled by Police since October 2017.

With all the fans’ expectation, on Monday, Police blocked Bobi’s annual Easter Monday concert which was slated to take place at his One Love Beach, Busaabala.

Although, the self proclaimed Ghetto Gladiator tried to hold a press conference at the beach following the concert’s cancelation, Police didn’t allow it to happen as he was arrested and driven back to his house in Magere and the latest we have learnt is that he is now under house arrest.

However, as all this is happening to him, music promoter Balaam Barugahara advised Bobi to apologize to the president so that he can be allowed to hold his shows normally.

“My advice to him is to go to the president and explain to him how police is always blocking his shows. Let him apologise promising that he will no longer equate himself to the president. If he thinks that he is on the level of the president so why are you blaming the president? You have to respect the ruling government” Balaam said in an interview with NBS Uncut TV show.

At a press conference he held at his home in Magere, Bobi told the media that the government is in preparation of introducing laws to not only stop his local shows but also the international ones