Quoting the 48 laws of power by Robert Greene and Joost Elffers, His Excellency Bobi Wine the Ghetto President of Uganja has sent a damning sarcastic message to his fans on Amama Mbabazi’s Sacking as Prime Minister of the Republic of Uganda. 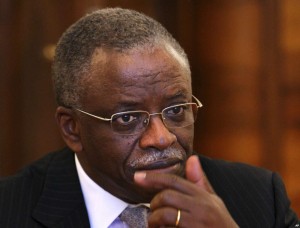 Although Bobi Wine starts by appreciating the fact that the outgoing Prime Minister loved his song ‘Mazzi Mawanvu’ ( Deep Waters), the poetic Gladiator reminds the once strong and super minister that, had he listened to a few lines in his song ‘Akalimu’ warning people never to overshadow their bosses, he would may be still be in things. This is his message posted on facebook;

“When I sang #MazziMawanvu in 2008, Rt. Hon. Amama Mbabazi loved the song and tended to use it so much in his public speeches, I felt honored. However, Hon. Should have listened to this line in #Akalimu…….. #Totunula_mu_sowani_ya_boss_wo. #ThereIsMorePoliticsInTheMusicIndustryThanInTheParliament #48LawsOfPower_Law_Number_1 #NeverOutShineTheMaster — with Muramira Philip at Kamwokya Fire Base Studios.”

Although Amama Mbabazi was unpopular with Ugandans a few years back especially after corruption cases related to him surfaced, he recently started winning support from his home town and other parts of the country when reports emerged that he wanted to stand for president against his boss who was being fronted as a sole candidate by the NRM caucus that sat in Kankwanzi. 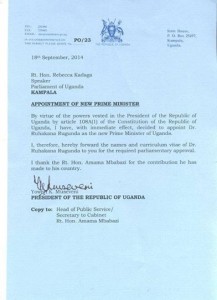 Recently, he attended a Uganda Cranes match in Namboole where he was cheered by a section of the crowd. Some fans even turned up in yellow T-Shirts with his image and a ‘Vote Amama Mbabazi for president 2016’ message.

Although a lover of music and good dancer of paka chini (As seen in MP’s parties), little is known of Mbabazi’s social life apart from attending Uganda Cranes games in Namboole as guest of honour.

Not much is known about his successor Dr. Ruhakana Rugunda’s social life as well. He rarely attends parties and let alone concerts. We await to see what he has in offer for the entertainment industry in his new capacity as Prime Minister.

Mbabazi has however handed over honourably and even thanked the president for giving him the opportunity to serve as Prime mister. He also congratulated the new Prime Minister in this message.

” I thank the President, HE Yoweri Kaguta Museveni for having given me the opportunity to serve my country as Prime Minister and in other capacities prior to this. I will continue to offer my services to my country in whatever capacity I can.
I have congratulated Dr. Ruhakana Rugunda on his appointment. I have no doubts that he has the capacity to execute the duties of Prime Minister effectively.
I thank my colleagues in Cabinet for the maximum cooperation I received as Prime Minister.
I also thank the Public Service, especially those that I’ve worked with all these years. I appreciate the great service they have rendered to this nation and will remain loyal and dedicated to working with them whenever my services are needed.
For God and my country.”