Uganda Cranes Captain Andrew Mwesigwa was the man at fault against Guinea last night as the team crashed out of African Cup of Nations 2015 to disappoint the home fans once again at the crucial moment. He may now quit altogether after apologising to Ugandans.

Social media has been awash with calls from fans asking him to resign or get the sack from the national team after his mistakes cost the team in the qualification match that would have helped the Cranes break a 36 year jinx.

Andrew Mwesigwa who plays for FC Ordabasy in Kazakhstan, was shaky straight from the kickoff together with his other defensive partners but made the glaring mistakes that turned the game in favour of the West Africans.

Although the opponents’ movement was fluid throughout the game, Mwesigwa being the captain should have kept his composure. Instead he made reckless tackles and challenges that invited problems for the team. 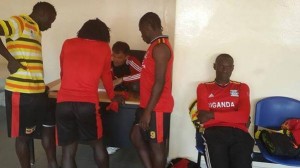 Mwesigwa was at fault for the freekick that led to the first goal in first half scored expertly by Guinea captain Ibrahim Traore after 23 minutes and then brought down midfielder Seydouba Soumah to receive a straight red card before Seydouba Soumah himself expertly dispatched the resultant penalty on 61 minutes to end the Cranes hopes and dreams.

“I humbly apologise to Ugandans for causing you
tears again. I know that all of you knew that we
were to qualify and i also expected it but we lost the
match.
Am sorry for “free kick” and the “penalty” because i
was responsible, am sorry for the “red card” i got, i
did all this in love for our country. I encourage
fellow Ugandans to be patriots too.
I advise Ugandans to stay calm coz this is not the
end, we shall make it next time.
I promise not to do such mistake next time. Love
Your Country, Love Cranes”. Mwesigwa wrote

Reports now indicate Mwesigwa has quit social media particularly Faceebook after receiving a torrent of abuses from disappointed fans. The team returns tomorrow at 1:35PM aboard Qatar airways and the captain may not be part of the returning team.