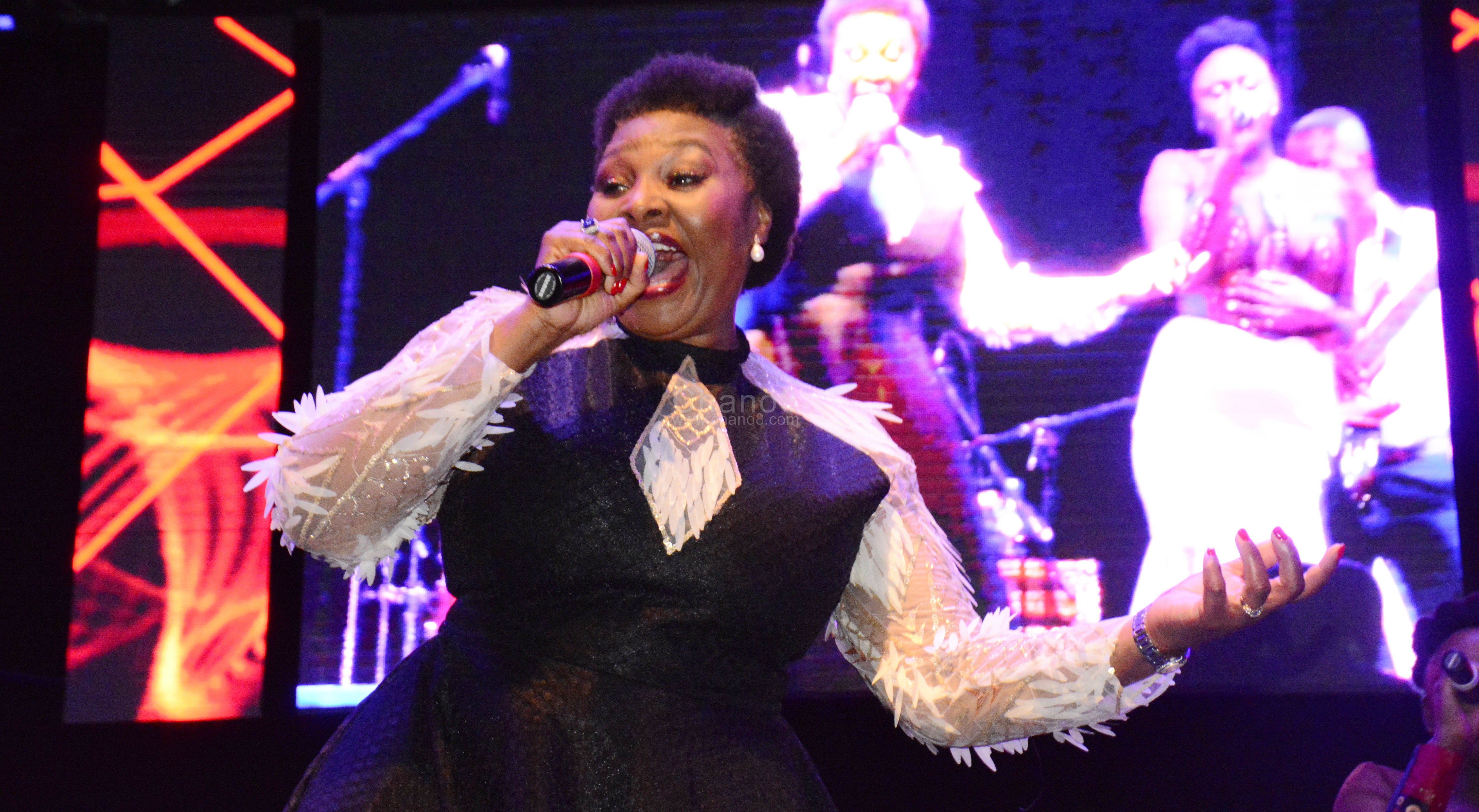 A power blackout and bad sound could not dampen the spirit of the Princes of Africa Yvonne Chaka Ckaka last night as she rolled back the years to put up a lively performance for charity. The concert organized by an NGO Shule Foundation was to raise funds to construct a school for street kids in and around Kampala.

The event which was organized by Shule Foundation founder Jackueline Wolfson in collaboration with partners and stake holders was to raise funds for former street children now settled under the foundation and Chaka was invited as the headlining artiste and gladly accepted to perform free of charge. 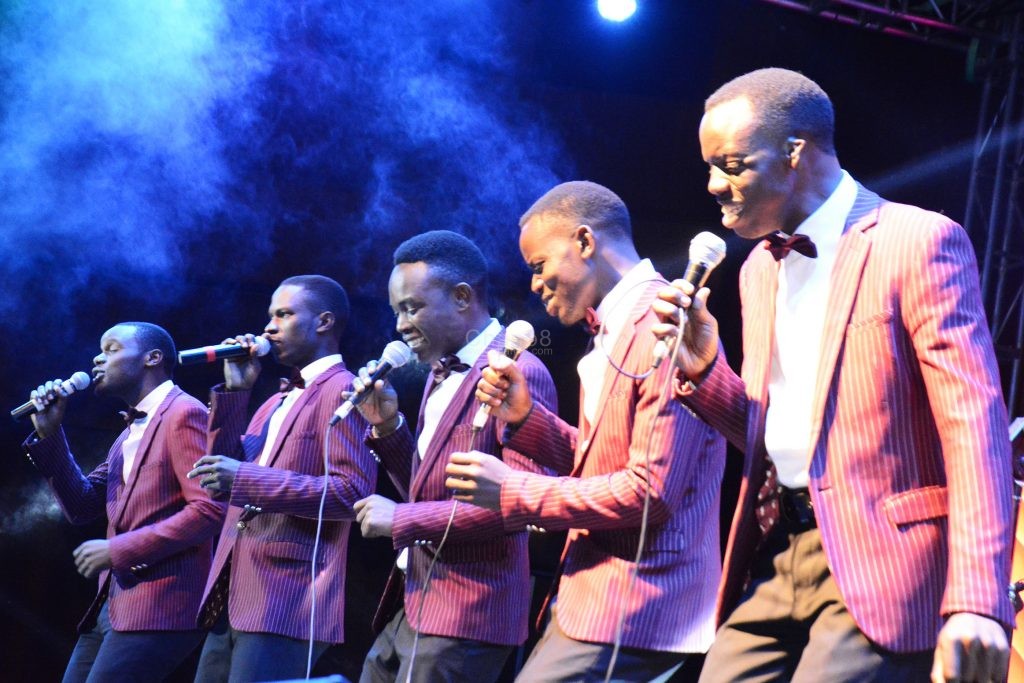 Jehovah Shalom opened up performances with some beautiful acapella ballads. 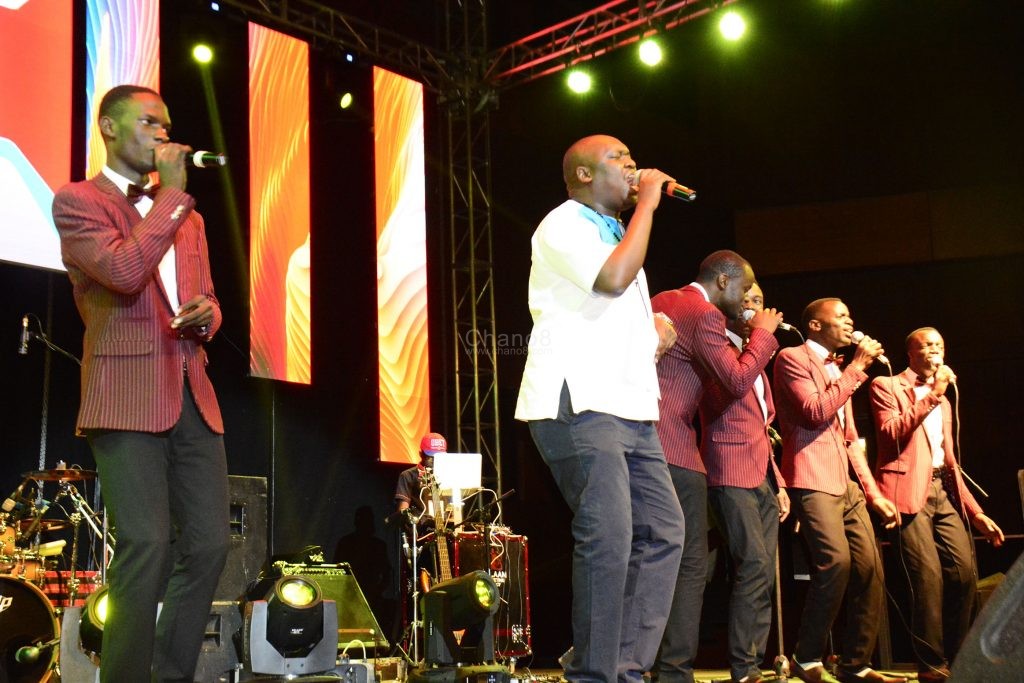 Host Salvado Idringi joined them with his own freestyle performance.

Shule Foundation founded by Jacueline Wolfson affectionaley known as Auntie Jackie works with streets kids moving them from the slums into their interim house where they ‘detox’, receive counseling, reunite with their families and prepare to go back to school at their rehabilitation center to ‘give them their childhood back’.

The foundation owns a 20-acre plot of land in Kigumba where they plan to build the first international standard pre-school that will introduce early childhood education to the villagers and slum dwellers as well as street children. They also intend to teach the women in the communities’ organic farming so that they can increase their household income.

“The Shule Foundation started with a seed of hope to bring quality education to children living across rural Africa. We believe this right should be protected—no matter where a child lives. Dedicated to building schools, not just classrooms, the Shule Foundation is expanding the reach and availability of a quality education to children in rural Africa, providing global opportunities for the continent’s next generation of change-makers and leaders”. Jackie said in a statement. 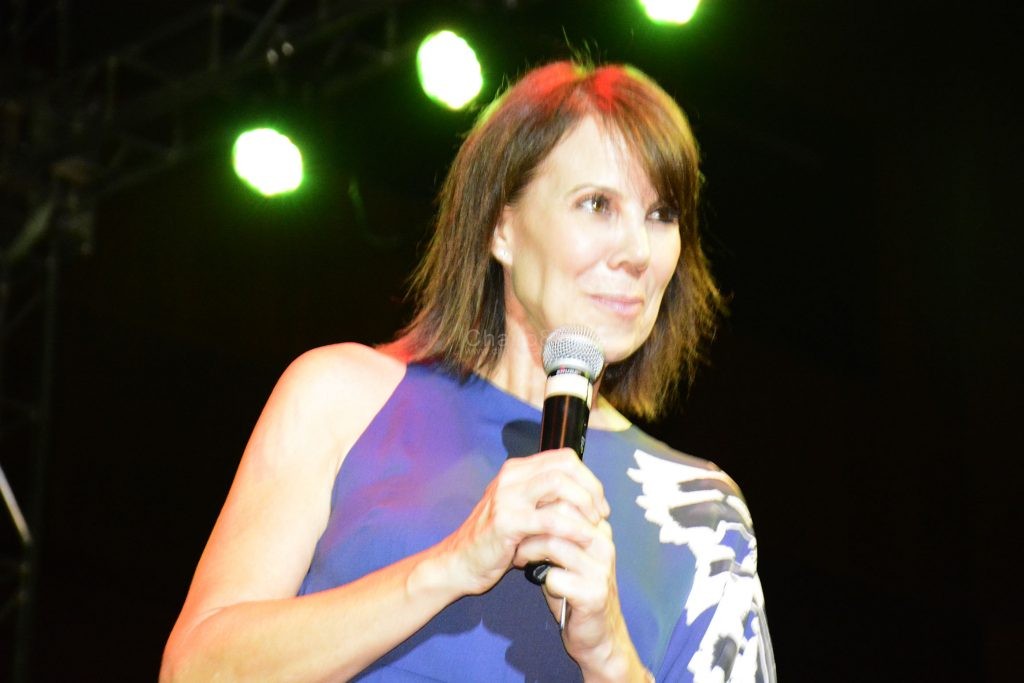 Back to the event, Chaka Chaka who is commonly known as the Princes of Africa gracefully stepped on stage at about 10. 30 pm clad in a black free-flowing dress. She still oozed the beauty, charm and flamboyancy she has been known for throughout her music career.

She mixed some of her new songs and inspirational songs honoring Nelson Mandela and Mwalimu Julius Nyerere to send a message to the crowd before embarking on a power play of her classic songs like I’m in love with a DJ, Let him go, Freedom, My Mama Land, that made her a darling of many on the African continent.

However as she embarked on the journey that took us back memory lane, there was an abrupt power blackout as she was mixing and mingling with the crowd. She had invited Rema Namakula who was the surprise act on the night and a young lady identified only as Gladys to do a rendition of the song ‘PNatural Woman’. 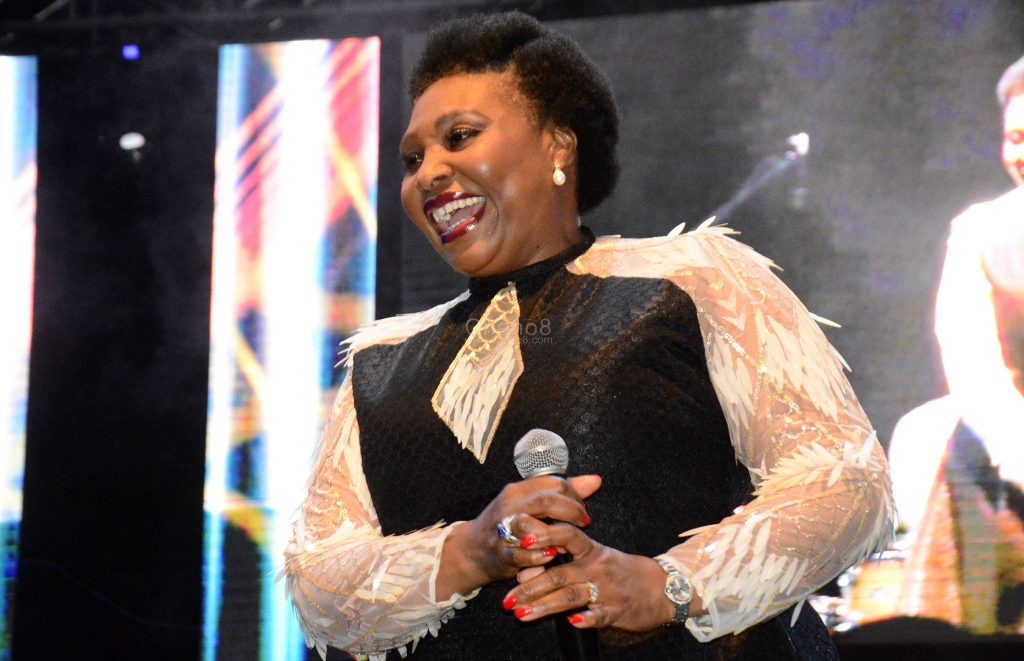 Still very charming and lively; Yvone Chaka Chaka kept it fresh even at 53.

As she sang and danced with Ghetto President Bobi Wine another of the high profile artistes who also performed on the night, the sound went mute and there was darkness at Kampala Serena Hotel’s Victoria hall. Although there was a band, she used a CD that also affected the sound. 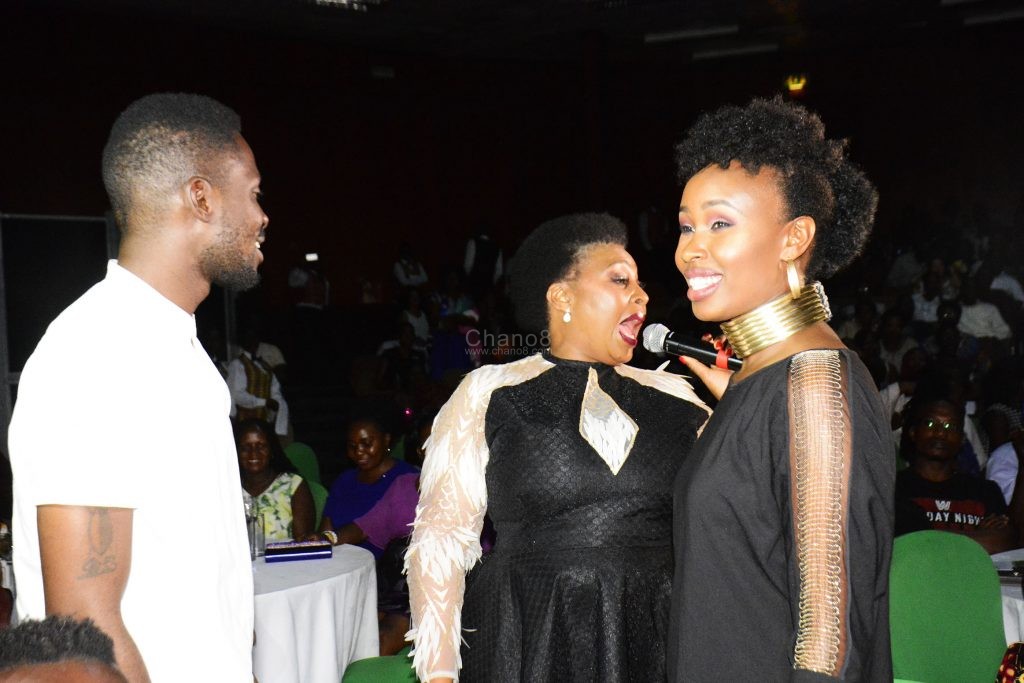 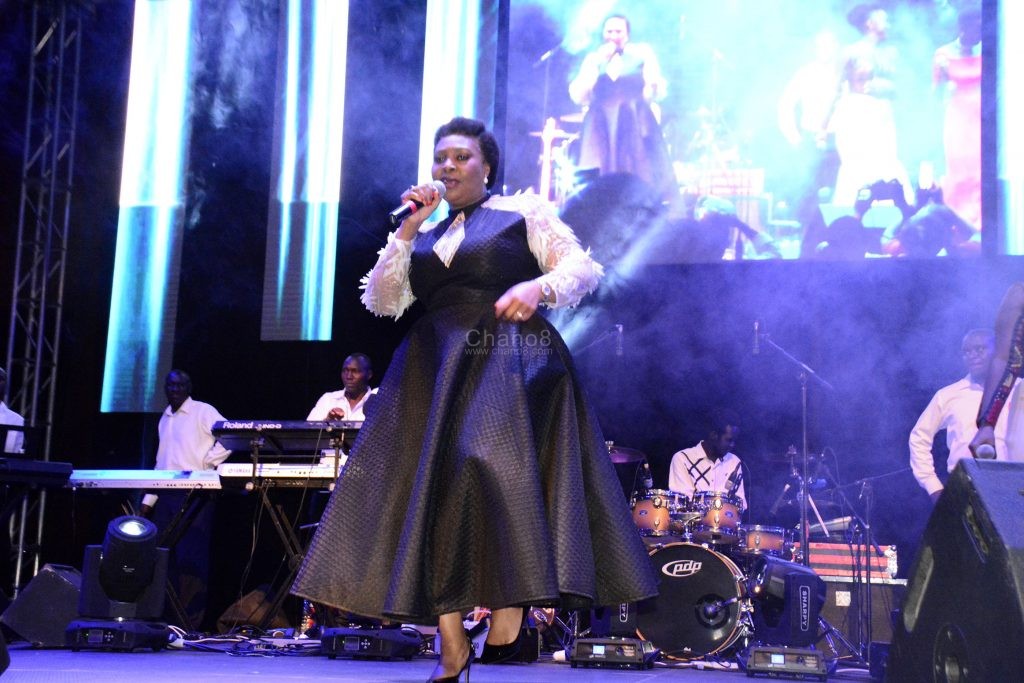 It is still not clear what caused the blackout but because events guru Balaam Barugahara of Balaam Marketing and Promotions Agency had provided the stage, sound and lighting for free, there were no complaints.

So, when power was finally restored, she pulled Bobi Wine who had already performed three songs alongside Nubian Lee back on stage and this time accompanied by the live band as they performed Umqombothi Chaka Chaka’s most popular song in Uganda. Rema and Gladys provide the backup vocals as Chaka Chaka invited the organizer Jackie and the children on stage. 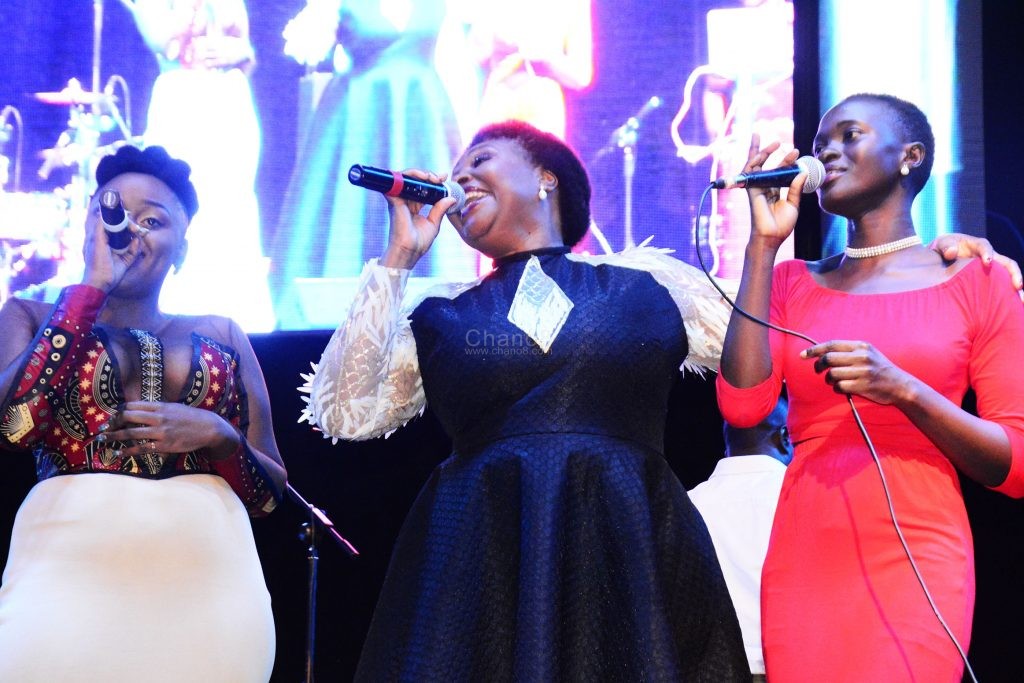 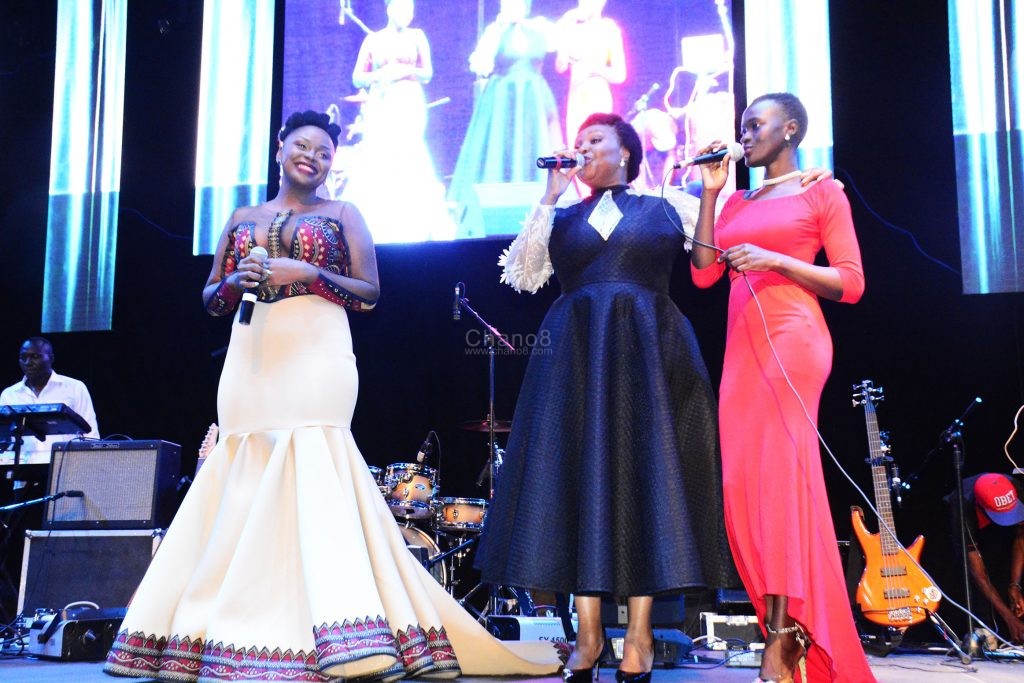 A painting which was done live at the hall was also auctioned for millions to raise more funds before the event came to a close at a few minutes to midnight. 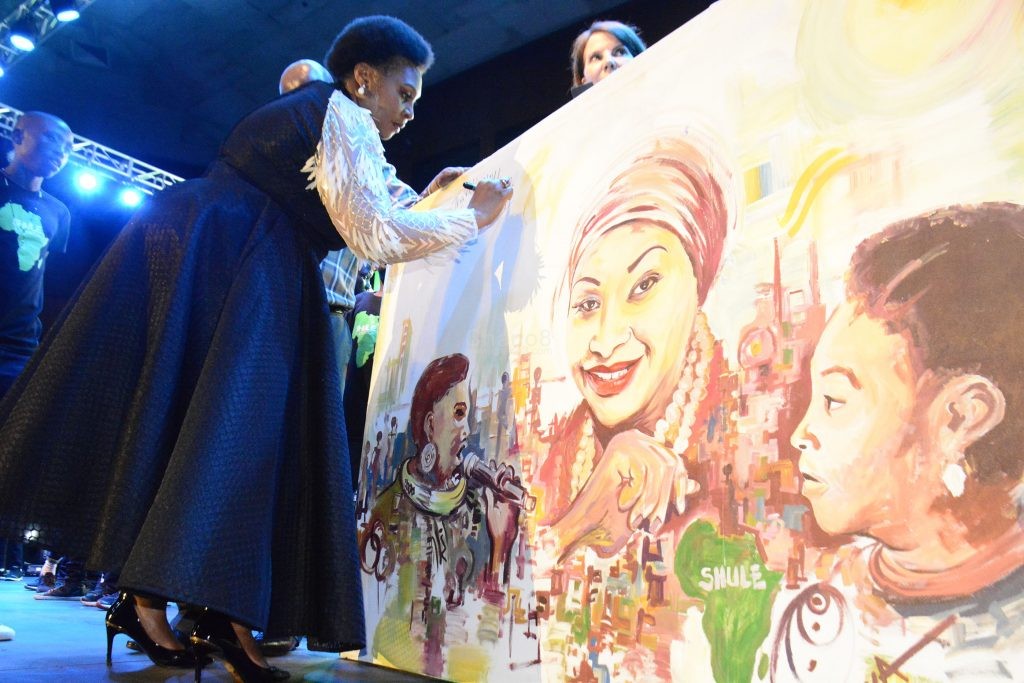 Chaka Chaka signs on the painting which was auctioned for millions. 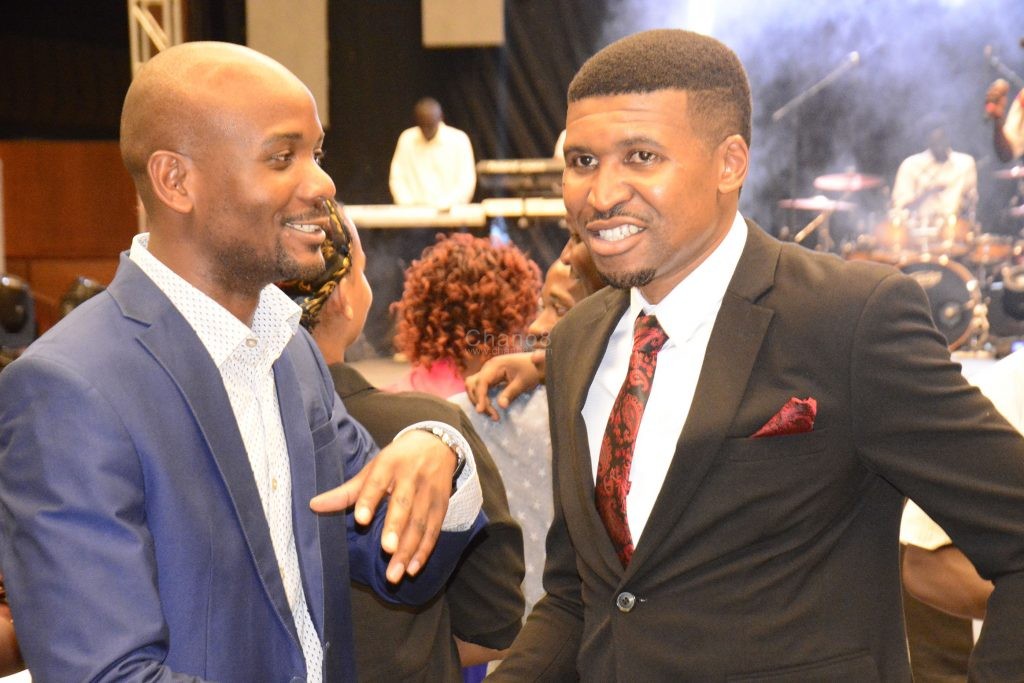 Chaka Chaka’s eldest son (R) accompanied her at the event. 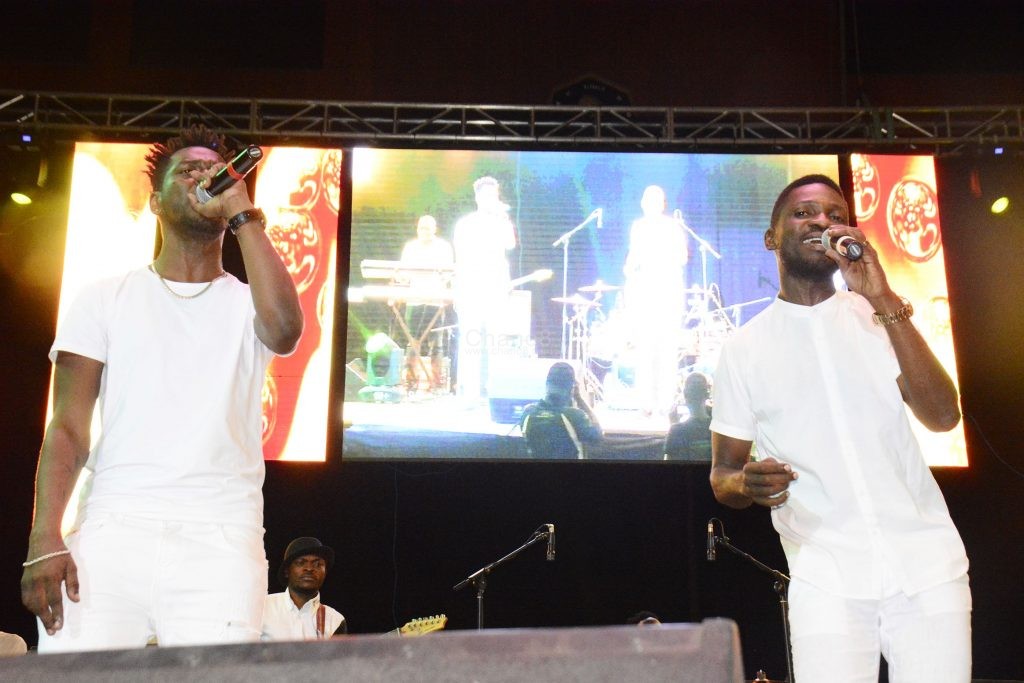 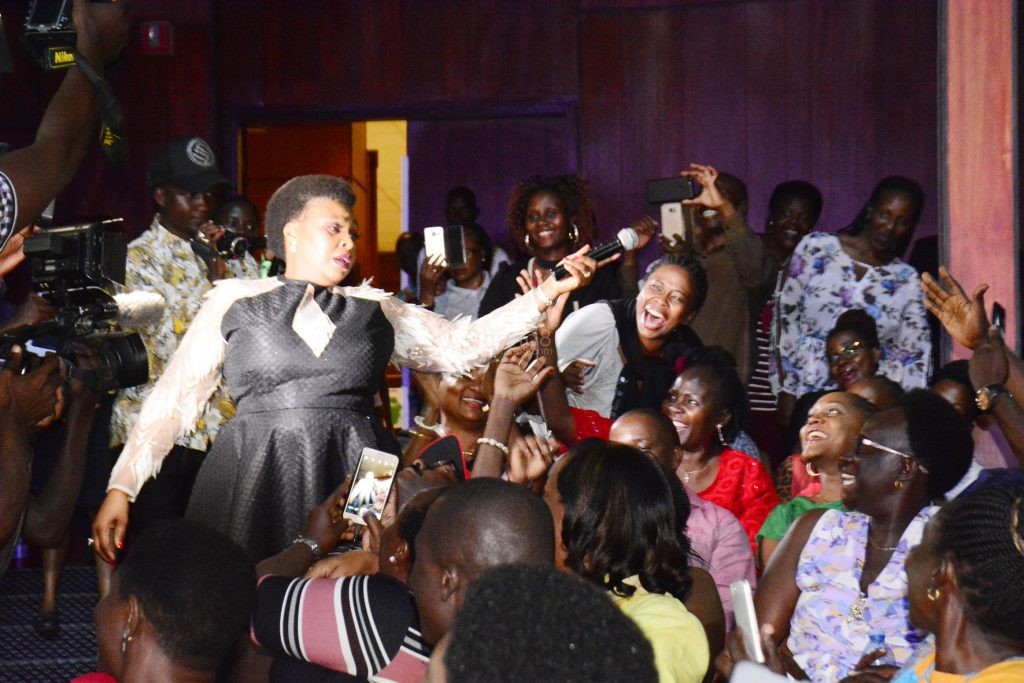 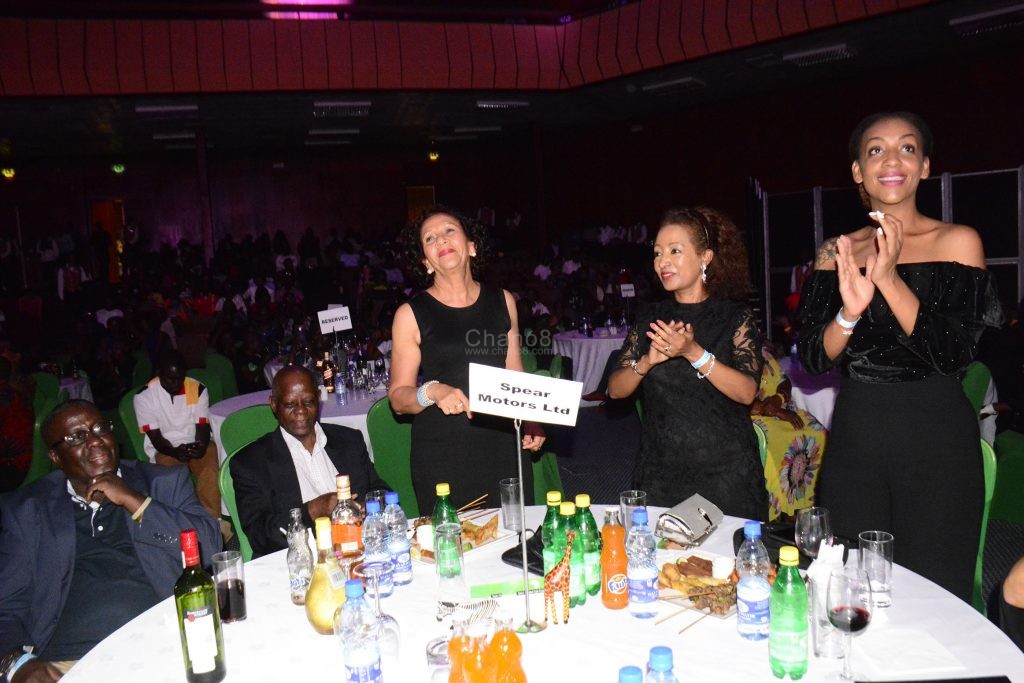 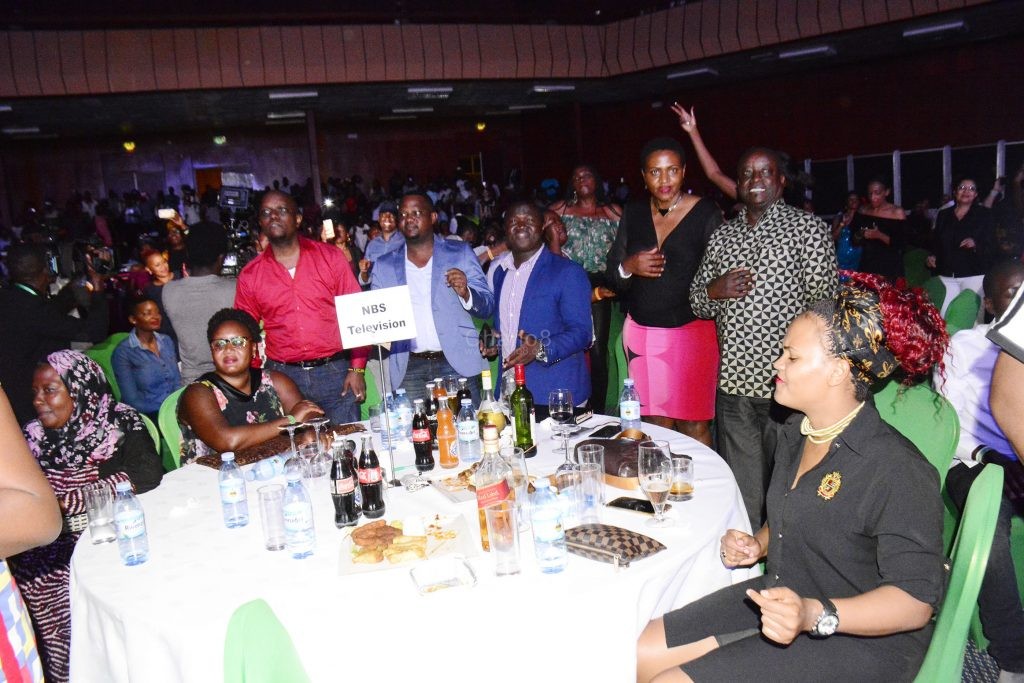 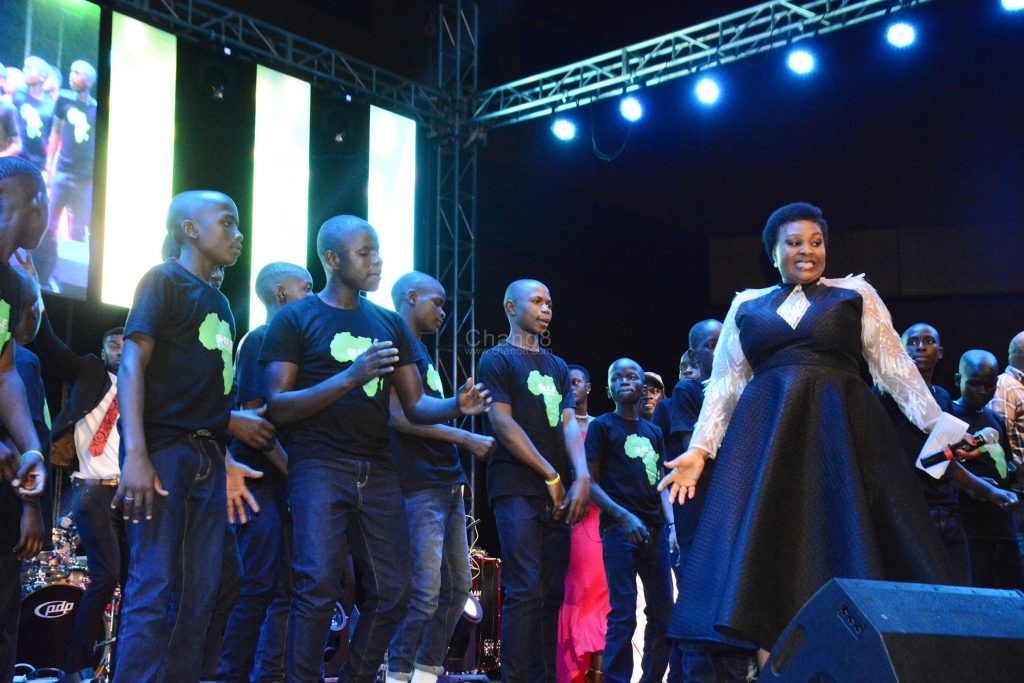 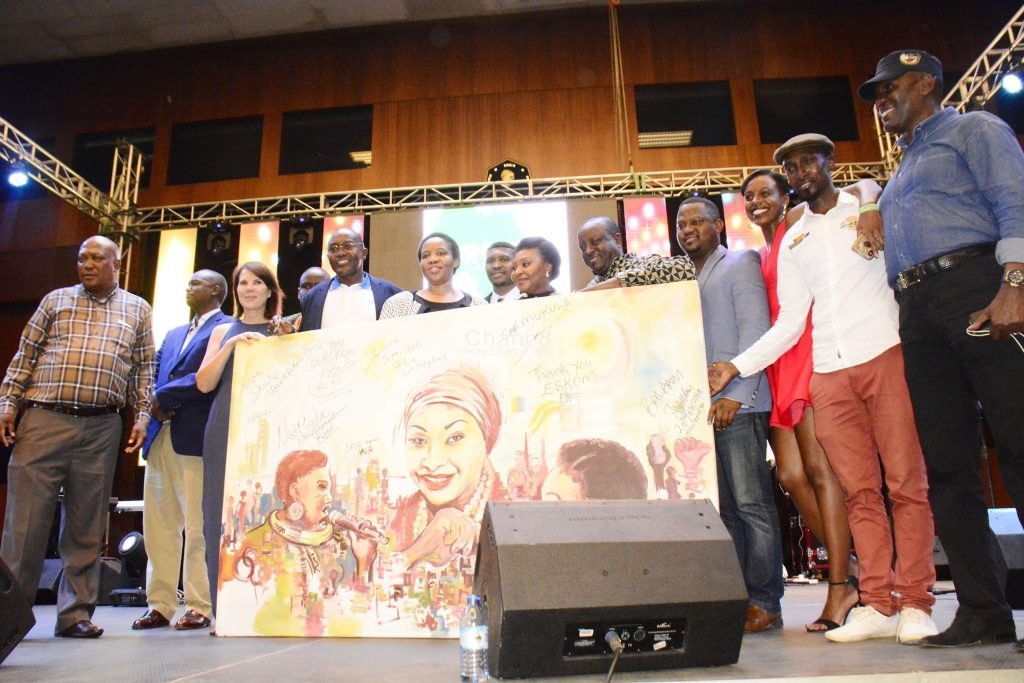 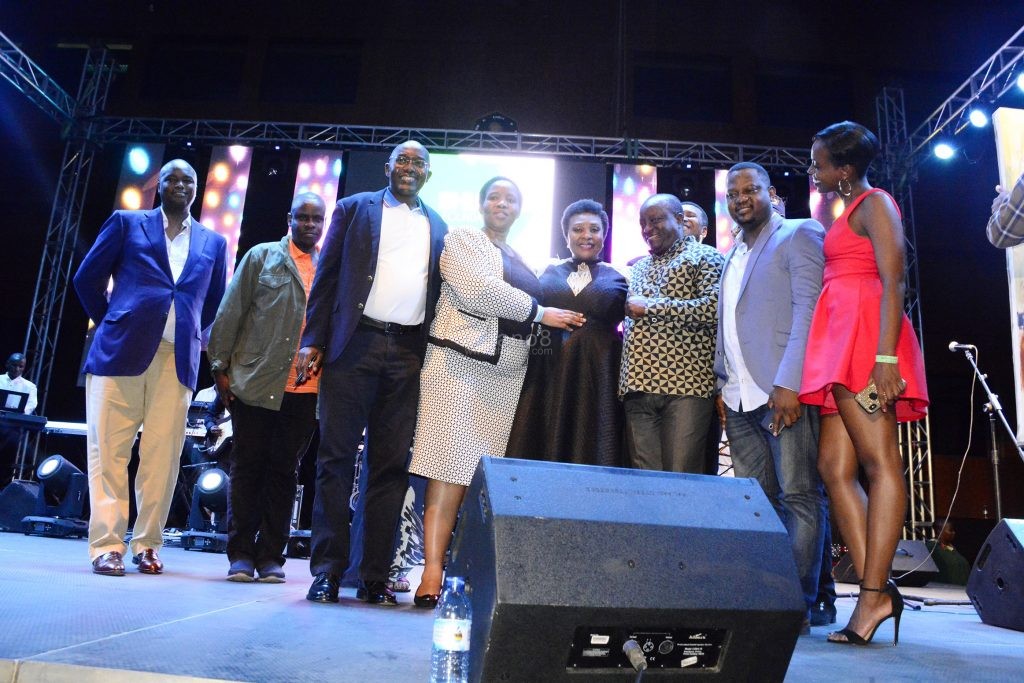