The rumours have been making rounds on social and mainstream media but now the ‘One Man, One show, One million Concert’ by self proclaimed Music Doctor Jose Chameleone is actually a reality.

The concert slated for December 19th at Kampala Serena hotel is expected to attract Uganda’s A-listers and Chameleone diehard fans from around the world. The wale wale singer while confirming the show posted;

“Started as a Rumour, I CONFIRM now!!! The sky has never been no limit!!! For my folks that will miss out on this SHOWDOWN,Never worry there is another charity do coming up soon!! 1 man ,1 show,1 thousand. Those up for this ,We are Loading Ugandan music on Record!!”

Kampala Serena Hotel which has been until recently, a reserve venue for only international artists and Jazz Festivals has now become a favourite venue for the local artists with the likes of Juliana Kanyomozi, Maurice Kirya and recently Desire Luzinda holding successful concerts there.

Next on the line is Gagamel boss Bebe Cool who is also organizing his ‘Best of Bebe Cool concert’ slated for August 8th at the same venue. Bebe Cool has already introduced new concepts for the show to set the bar high for main stream artists who want to follow suit. He has introduced an electronic ticket system that operates like an ATM Card. The Gagamel Cards which are now on sale are swiped at the entrance of any Bebe Cool Concert and money worth the entry fee is deducted from the card holder. 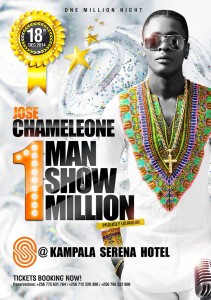 Chameleone himself who is always full of surprises is expected to bring in something new for the concert after holding successful ‘Tubonge’ concerts earlier in the year and also having successful tours in Europe and Asia. He intimated to Chano8 that the game has now changed.

We keep our fingers crossed as we await to see what unfolds in due course. We will keep you posted as usual in case of new developments. So watch this space.