There was a record of goals ever scored in a single Champions League Night of 40 goal which was the biggest ever in a night of eight fixtures.

Bayern Munich and Shakhtar Donetsk, who bagged seven goals apiece away from home were the chief contributors. Bayern gave defender Ashley Cole nightmares as they crushed Roma with five first-half goals, while Shakhtar’s Luiz Adriano equalled Lionel Messi’s record of five goals in a single match as the Ukrainian side marmalised BATE Borisov 7-0.

And there was a remarkable dramatic encounter in a match where Sporting Lisbon came from a 3-1 dificit to level before they were reduced to ten men. That Schalke’s 4-3 victory over Sporting Lisbon saw the away side concede a controversial penalty three minutes from time. 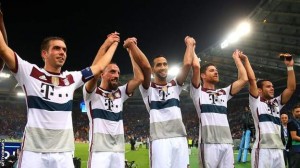 And Manchester City continued with their disappointing start to the campaign when they surrendered a two-goal lead to draw 2-2 at CSKA Moscow in ice cold weather.

Chelsea meanwhile continued with their fine form by sweepin aside the challenge of Slovenian opponents Maribor. The Blues recorded their biggest ever Champions League victory with a 6-0 win.

Eden Hazard bagged two goals in a superb performance while Didier Drogba scored his first goal for the club since the 2012 Champions League final however there was a dampener on the victory when Jose Mourinho’s side lost striker Loic Remy to injury. The Frenchman now looks set to miss Sunday’s trip to Manchester United in the Premier League this weekened.

Not to forget is another mouth-watering evening of Champions League action, as Liverpool welcome Real Madrid to Anfield as Anderlechttake on Arsenal