The Club Mega Fest went down on Saturday 20th September 2014 at Namboole. So many things happened but above all Ugandans had fan and partied till late in the night.Chano8 was there and now we bring you selection of some high lights

–The local artists were surprisingly on fire. Most especially the ‘upcoming’ ones who put up top-notch performances. From the likes of Maro, Big Eye, Coco Finger to Gravitty Mutujju, Pallaso and Sheebah it was excitement at its best for fans. Bebe Cool crowned it all with a live performance supported by his Gagamel Band. The fans were so excited to see some of their local Heroes on stage that, they gave them rapturous screams and cheers and for a moment forgot about the international stars. 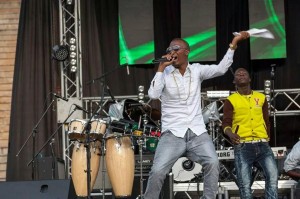 The likes of Big Eye put up good performances

–Beer and Food was available in plenty for the hungry ones. Tents were erected serving food to invited guests and also selling to those who wished to buy. However at the VIP section, guests were issued coupons that allowed them to walk away with drinks like Beer Soda and Water. Although some waitresses were selling some of the beer, later those who had tickets received more coupons hence more drinks. No wonder the people at the VIP section stayed put when others poured into the turf near the stage.

–Security was tight at all the entrances with guests subjected to thorough checks. This comes after reports of an impending terror threat that surfaced. Security expert Dickson Okello was a busy man making sure everything was safe and secure. 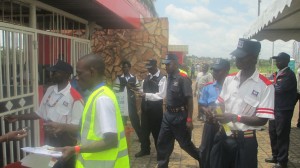 Security was tight at the gates 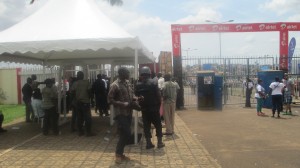 –Delays and time wasting. The concert was scheduled to start at 12 Noon but kicked off officially at about 5:30PM. This was partly because of the security concerns and consequent thorough checks but mostly because organisers failed to program things properly.

They, failed to follow a flowing program because they wanted to please the artists by allocating the slots in order of who is bigger than who. This caused a lot of delays as some artists failed to agree on who should go on stage before the other. Reports indicate that Bebe Cool had refused to come on stage before Burna Boy who eventually performed last when most of the people were long gone. The MCs also took long on stage talking nonsense. And a lot of long breaks in between performances pissed off so many guests who resorted to abusing and cursing the MCs

–Chameleone, Mafikizlo no show. A lot has already been said about Mafikizolo and Chameleone not performing. Club the organisers of the show have since issued statement explaining why they didn’t perform. However what did not go well with the fans was the fact that Mafikizolo were actually in Namboole and waited for over four hours and couldn’t perform eventually yet many fans had gone to Namboole specifically to watch the ‘Khona’ super stars. And nothing was said then until many fans walked away in protest and frustration cursing the organisers.

–Sound and Stage: We know that Fenon Records boss Steve Jean is a perfectionist and wants his things done right. He also has a track record of good work done over the years. However this time they got it all wrong. May be they were over welcomed by the size of stadium and number of fans they had underestimated in attendance, otherwise the sound was so bad that guests seated in the pavilion VIP section could not hear what some of the artists were saying or singing. It got worse when golden Band were on stage. And Ronald Mayinja could be seen walking on stage with a microphone but many people could not figure out what he was saying. This continued even when Bebe Cool and Gagamel were on stage. The tiny screens could not help either as guests kept straining their eyes to try and catch a glimpse of proceedings on stage.

–Patra: Her choice of attire left many speechless, considering her age and body shape. Patra is known for being daring but turning up in a fishnet at her age, was not good sight to the eye. To make matters worse she also failed to put up a good performance and only did about two half-hearted songs and walked away leaving many fans disappointed.

– Ragga Dee, Comedians and MCs: Ragga Dee came on stage and started yapping and kept on and on instead of performing until when fans got tired and was booed and clapped off stage. The comedians Patrick ‘Salvador’ and Alex Muhangi aka Aleku also served stale jogs to the now tired fans who also clapped them off stage.

–The MCs were too many and over elaborated in their style of announcing performances and ended up boring the fans. MC Kats even had the guts of sneaking his girlfriend Fille on stage. She was not scheduled to perform but to the amusement of the fans and organizers, the MC connived with the DJ’s (And what was it with repeating the Buganda anthem again and again?) and made her perform two songs. Kats himself joined her on stage when she sang her ‘my Husband’ song.

A lot is always expected from Club as organizers of such events. But from the feedback so far coming through from fans, a lot was left to be desired and hopefully they can fix this very first before even thinking of making the Mega Fest an annual event.