The English Premier league returns this weekend after a two week international break. A mouth watering clash between Arsenal and defending Champions Manchester City at lunch time, kicks off the weekend drama that promises to be exciting as well.

Arsenal will try to avoid last season’s embarrassing 6-3 drubbing in the hands of the same opposition and hope to fare better this time.

The Gunners who finished fourth last season, could hand over a debut appearance for England Striker Danny Welbeck. Fresh from scoring two goals for England in a Euro qualifier against Switzerland, the former Manchester United striker signed for £16million, will be out to prove a point or two to his former employers that he is a top striker. 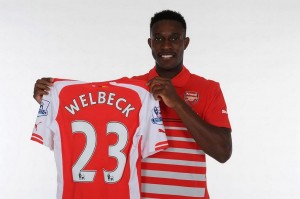 Welbeck will be out to prove a point

The debate dominating in the media and local bars and ‘Bibandas’ in Uganda and other parts of the world has been whether Welbeck was not good enough for Manchester United as claimed by new Manager Louis Van Gaal. Today provides the first opportunity for fans and critics to make their assessment of the pacy striker.