Ahead of the One Man One Million show happening tonight at Kampala Serena Hotel, Chano8 has exclusively obtained statistics that show which FM stations play Dr Jose Chameleone’s hit song Wale Wale the most as well as those that play it the least.

The statistics obtained through a high-tech media tracking platform shows Super FM as the leading station with 16 plays in a ten day period (3rd-13th December). The system which can track into details the timing and frequency of songs played on FM radios can be used to determine the favorite songs or most requested songs as well as what type of music the different Radio stations prefer to air out.

This particular statistics record shows KFM and X-FM tie in second place with 11 plays during the same period. Radio Buganda (CBS) and Record FM trail in playing the song expected to take center stage at tonight’s concert with a single play each in that period. 22 FM stations around Kampala were used.

The Graph showing details of airplay

The system can also be used to determine which songs are actually ‘loved’ the most when pitted against each other to determining say song of the year for crowning the best in an awards ceremony. 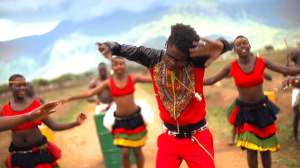 Chameleone in the Wale Wale video

Artistes can also use the same information to gauge their songs and asses their performances compared to other artists for strategic planning in areas of selecting themes for their songs and appropriates genres.

The pilot project which is still being tested for future media and communication data gathering can handle multiple tasks that can be useful for research, marketing and promotion as well as source of information for reference in a variety of situations.