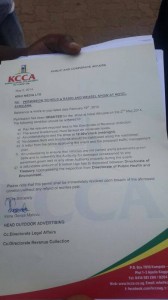 The much anticipated Amaaso-Ntunga double album  launch by the dynamic duo of Radio and Weasel is still on. Contrary to earlier reports circulating in the main and social media forums that it was cancelled due to lack of clearance from KCCA.The Authority later cleared the air and handed the group a go ahead with a letter of permission and concert permit.

The concert slated for this evening at  Hotel Africana people’s space kicks off at 6PM with Jose Chameleone, Bobi Wine and Iryne Namubiru all set to curtain raise for the boys who have also been in the news for apparently falling out with their manager Jeff Kiwanuka. There were also rumours that, the whole group was set to split. They have since denied the rumours

Entrance for the concert organised by Club Music and Silk events is 20,000/= for ordinary stands and VIPs will part with 50,000/= o access the venue. They late move to Satelite Beach in Mukono on Saturday and crown it all at Resort beach in Entebbe on Sunday