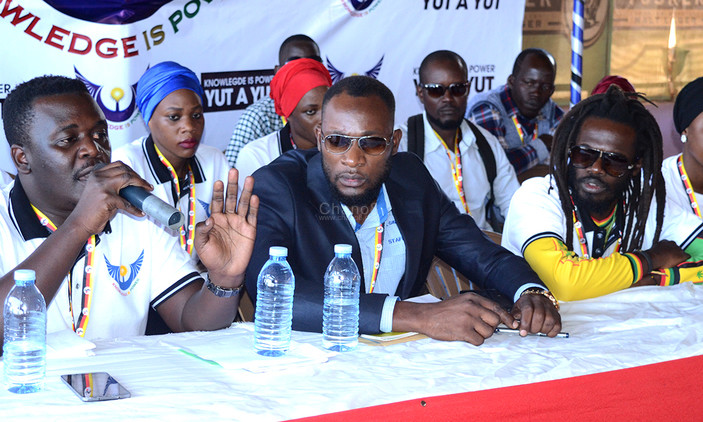 They may be faded artistes to many but what Henry Tigan real names Kirumaganyi Henry, Bugembe Richard alias Buchaman along with Kian Banks have started might save the music industry if all goes well.

The three artistes have started up a group they have named ‘Yut A Yut’ which is Jamaican Patwa for ‘youth remain youth’ which they will be fronting to save the Ugandan music industry.

They are fronting their group to be in the lead of taking artistes away from politics because they believe politics is slowly destroying the industry.

“We are being used despite being the majority in Uganda. We are encouraging you to behave well as that is the only way we shall reach our goals and become hardworking people who can never be used by politicians,” said Henry Tigan.

Left to right is Henry Titan, Kian Banks and Buchaman who started a Youth Movement To Keep Away From Politics

The group is also going to work on seeing that the youths don’t get involved in riots and be used by politicians for their selfish gains.

To drive their point home, the three musicians also recorded a song titled ‘Dikuula’ that tackles all they want the group to achieve.

They made this announcement through a press conference they held on Friday in Luzira and they gave an example of what happened to musician Bebe Cool at Lugogo Cricket Oval where he was chased off the stage by being thrown bottles at.