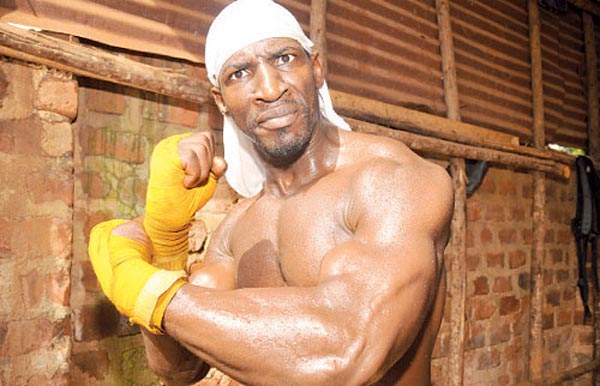 From weird ‘Azonto’ and lingala strokes to street hip-hop and dance-hall moves, Man mountain Golola Moses of Uganda,took to the floor or rather turf and started dancing in the 6th round of his crucial kick boxing re-match with fierce local rival Titus Tugume – he of the ‘Anafair’ fame on valentine’ day.

Golola is known for his pre-match antics

Well aware he was leading his UPDF corporal rival, and in control of the ‘Revenge Fight’, Golola thought of an idea to give his fans more entertainment. Between the breaks and especially after the 6th round, Golola got into celebratory mood and pumped up the crowd with his dancing skills and dazzled with his crowd interaction usually a reserve of the Rocky action movies that worked extremely well for him.

When he camped in Mabira forest before a fight and ate insects, wild animals and took porridge in a jug

As the crowd watched in a mixture of bemusement and excitement a match that was supposed to have high stakes after the 2014’s famous ten second fight when Golola knockout Tugume with a single punch this particular one turned even more of a walk over despite Tugume’s efforts of taking it to the last round and points decision.

Many kick-boxing enthusiasts had filled Lugogo Arena with others glued on television screens in anticipation of a hot contest and pure kick-boxing action but Golola Moses who claims he is not a joking subject gave them more and who could complain after  the surprise hilarious dance performance? Even Tugume’s corner looked amused and weakened the more.

Right from the build ups to technical preparing, Golola always has something special for his fans. Known for his marketing gimmicks, Golola always makes sure he throws in those now famous catchy punch-liners that send journalists coving upcoming fights into frenzied bouts of laughter.

He is now officially famed for single handedly popularizing the sport that was virtually unkown till 2010 with his funny pre and post fight antics and utterances that his opponents had better start taking seriously following an improvement on his technical abilities which more professional and experienced fighters like Hungarian Andras Nagy and American hard-hitter Richard Abraham had previously exposed.

And pulled off Arnold Schwezznegger stunts

Some call him a comedian; others refer to him as a smart marketer while some think he is just loud-mouthed. Yet in the music circles, he is known as a rapper and fluid dancer. On the canvas, his fans think he is the best thing to ever happen to Uganda’s Kick-boxing as a hard hitter, a rock and an inspiration.

No matter which ever way you view him, Golola Moses is one of the few sportsmen in the world who can comfortably be described as the ‘complete entertainment package’. And as some Ugandan fighters like Ronald Mugula and Titus Tugume have since discovered, he is also not a joking subject in the ring.

SOME OF GOLOLA MOSES’ FAMOUS QUOTES
*When the white man heard about the birth of Golola Moses; Uganda was given independence.

*Golola Moses is the only man who can hang his clothes on the MTN line.

*I can make a woman pregnant by just looking at her.

*I have to tie myself up before going to bed; I might kill myself while sleeping.

*I am the only man who can tear –off face book pages.

*When a car knocks me, it gets injured.

*When mosquitoes bite me; they get sick of malaria.

*I jogged home, leaving my mother in the hospital after giving birth to me.

*Golola Moses is his own ancestor.

*My energy is now volcanic, it keeps erupting!I

*When the colonialists heard about the birth of Golola Moses, they immediately granted Uganda independence.

*I’m not a joking subject that’s why UNEB is scared of adding me to their syllabus. I’m sure my name will be an answer to one of the questions in Social Studies in the next PLE.

*.He updates his Facebook status via the ATM machine

*.The car has to look left and right to see if Golola has crossed the road

*.The only one who buys pirated movies, pulls his antenna then watches them in HD

*.The only man who can climb mountain dew

*.The only man who can pocket when he is naked

*.People use windows on their PCs because Golola is standing at the door.