The experienced American sent Golola to the turf several times before the partisan home crowd started pleading for the match to be stopped. After Abraham sent a combination of well coordinated punches and kicks, Golola was left with no option but to clutch the American who has won over 35 fights to avoid further punishment. 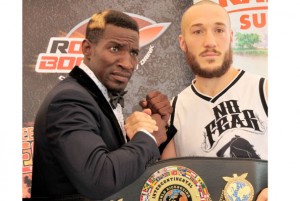 By the time the 125-149 result was announced in favour of the American, many disappointed fans who were expecting it trickled out of the venue complaining.

The judges all scored a unanimous decision and it could be worse had it not been for Golola holding tight onto the well drilled American fighter. Eventually giving 35-50, 47-49, 45-50 all in favour of the American.

Goloa who had prior to the match promised to beat Abraham to death was left hopeless and almost ending himself into the coffin he had prepared for the American which he presented at a press briefing in Centenary Park.

Golola who conceded defeat but said he was not ‘beaten’ wants a rematch and sure enough Abraham obliged and says he is always ready.