The Rising Star Awards were held on October 4th at Club La’Bonita and the colorful event saw many upcoming and rooky stars walk away with awards.

The awards are organized to recognize the effort of mostly young and upcoming artists as well as a few established ones in various categories throughout the year.

Now the organizers of the award are organizing something special for the fans. It will be an end of year party and concert. The night that will also double as meet and greet party for Nominees, Winners and fans is scheduled to have some serious performances on Friday December 5th at Club Cyclone. Irene Ntale melody (of the ‘Nkoleki’ fame) Ziza Bafana, Santana among others are expected to feature in a fun-filled night. 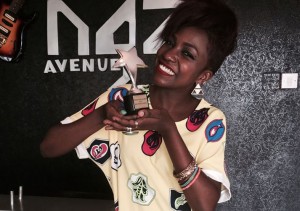 Irene Ntale was one of the winners

The organizers are planning to include some dance crews, comedy and DJ categories for next year to broaden the categories. This year’s Awards were organized by Rising Star Media & Limitless Production and sponsored by CELEBRITY BUZZ, NBS, WBS, CLUB BEER & SMS ONE among others