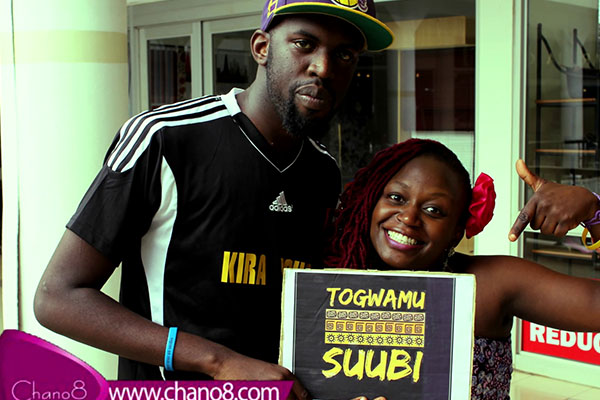 With their Togwamu Suubi already doing well on the airwaves, Chano8 caught up with Airtel Trace Star winner Sandra Suubi and Benezeri to know the story and inspiration behind the song. Sandra said that it was about relating it to Uganda,

‘From the beginning I like the message because it relates to Uganda. This is Ugandan music, we don’t only need to support it, but we need to give examples from our country and I think that’s very powerful. I also think it’s a very experimental song, it can’t really fall anywhere, it demands its own space and I think that’s what music needs to do and that’s what we as artistes need to do. That makes it very powerful because it’s done excellently, it’s done with a lot of heart. It really brought out a lot out of me because it involved singing and knowing someone in that situation.’

Benezeri who is known for songs like Girls From Kampala, Blest, Zuukuka part 2, Mama, Amama, Stay with me remix and Abeyo among others talked about their togwamu suubi saying,

‘I rap but we tried our best not to make it too fast and then we removed the drums out of it so that all people can understand it. This is probably one of my most meaningful songs. I had the inspiration to do a song that could encourage people. So I got in touch with Sandra because I had always wanted to do a song with her.’

‘We tried to do something special and we didn’t want to be in any genre.’

Have a look at the video interview below.