Shakira to perform at closing ceremony of World cup 2014

After Brazil’s 7-0 Obliteration in the hands of Germany in the Semi finals of the world cup 2014, the mood among Brazilian fans has been very gloomy. However things will have to change on the closing ceremony before the final between Germany and Argentina who booked there place by beating Netherlands 4-2 on penalties.

­Indeed her hips don’t lie. Colombian pop star Shakira is poised to score a FIFA World Cup hat-trick since announcing that she will perform before the final match in Rio de Janeiro on Sunday July 13.

“I’m thrilled … I have an intricate relationship with football for obvious reasons, and I truly understand what the World Cup means to so many people, myself included,” Shakira said. 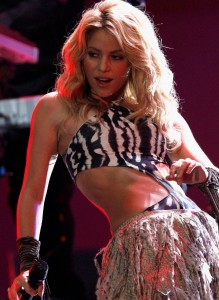 Shakira performed her hit single Hits Don’t Lie At the 2006 FIFA World Cup in Berlin, She then returned to the World Cup stage in 2010, performing the event’s official song Waka Waka (This Time for Africa) at the closing ceremony in Johannesburg, South Africa.

Shakira who has already proven more popular than World Cup openers Jennifer Lopez and Pitbull, with La la la (Brazil 2014) out-performing the duo’s official World Cup song We Are One on the Billboard Charts.

With their South American rivals contesting against the team that humiliated them, it remains to be seen which team the local fans will be supporting on Sunday.