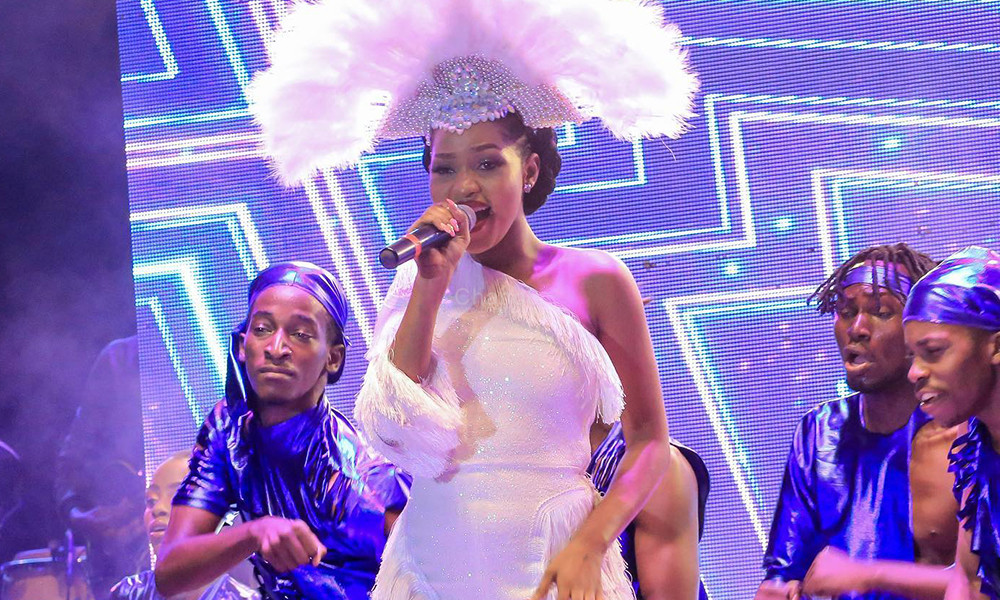 Friday the 17th of January is the day singer Spice Diana made history as the first female local artiste whose concert filled the Namasuba, Kampala based Freedom City Mall Auditorium to capacity.

It was a fun filled concert that excited revellers who on top of watching the main performer Spice, watched several other local acts who came to support her

After a few seconds took to the stage with all the energy, the rowdy revellers didn’t were seen throwing multiple plastic bottles at the ‘Indicator’ singer, on top of hurling insults at him and angrily telling him to get the hell off stage.

He first braved the bottles and continued performing until he later knelt down as he told the revellers to do whatever they wanted or even kill him if they thought he isn’t a Ugandan just like them.

Of course to restore calm, security had to intervene and try to convince Big Eye, who still wanted perform, to get off stage. They managed to, but after struggle which saw them forcefully sending the ‘Big Music’ crew boss off stage, to save him from the unruly crowd.

2. Rapper Gravity Omutujju Falls Off A Dancer’s Back

Rapper Gravity Omutujju is known for being an energetic stage performer and he never disappoints. He had yet another exciting performance at Spice Diana’s concert but this time round, his dance stunt failed to work as he fell to his back, off a dancer’s back.

During his performance, he tried to engage a female dancer who was on stage dancing the famous ‘bend over’ dance.

After watching and enjoying the dancer’s chubby body’s movement, Gravity excitedly jumped and sat on her back and this happened at the time when the dancer had also made a decision to stand straight, dropping the ‘Winner’ singer who was on top, down on the floor.

There is a controversial socialite called Sheik Umar who is known for splashing money on artistes and revellers at events. At Spice’s concert, he was luckily allowed once to splash money into the revellers but the second time turned into a nightmare for him

He walked to stage with all the confidence thinking nothing was going to happen to him but to his shock, he was aggressively pushed away by producer Bushington who was the heading the production team at the concert.

His efforts to convince Bushington to let him do his thing were futile as he insisted and didn’t allow him. With all the shame, the Sheik went back to his seat in the VIP section and things moved on

Apart these incidents, Spice’s concert is still the talk on social media and on the lips of those who attended