The Uganda Cranes are on the brink of breaking a 37 year old jinx as they stand a very big chance of making it through to the 2015 African Cup of Nations as they take on Guinea today in their final qualification match needing a win or a draw.
The Cranes who have disappointed their fans after failing to qualify on several occasions on the last minute have a chance to redeem themselves and making the nation proud after they beat West African giants Black Stars of Ghana 1-0 in Namboole last Saturday to improve their chances.
However this time round, they even stand a better chance especially considering the fact that Guinea’s so called ‘away ‘ match will not be played in their own country turf but rather a neutral ground Stade Mohamed V, Casablanca in Morocco. 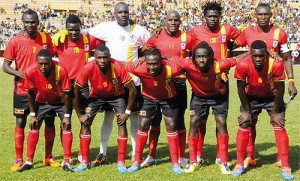 Guinea who also travelled to Lome and stunned the hosts Togo with a 4-1 to keep their chances of qualifying on track, will not be an easy ride though considering they are very good ball handlers and usually keep possession very well.
However moral is high in camp after Uganda Cranes received a timely boost yesterday when the nation’s president H.E Yoweri Kaguta Museveni telephoned them and urged them to be strong and focussed. He gave Coach Micho Sredejovic some technical advice and tips on how to win and make the nation proud by re-writing history. 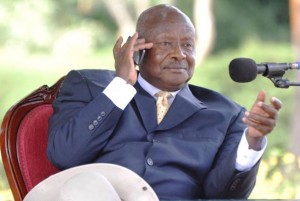 “Our boys need to position well during corner kicks. Do not play under pressure, do not panic. Ugandans are proud of you. Qualify and be part of history” Mr Museveni said.

Uganda need just a draw at the least make it to the finals in Equatorial Guinea despite sharing similar points with Guinea due to the head to head rule which places the Cranes above their opponents after they got four points off the Syli Nationale.