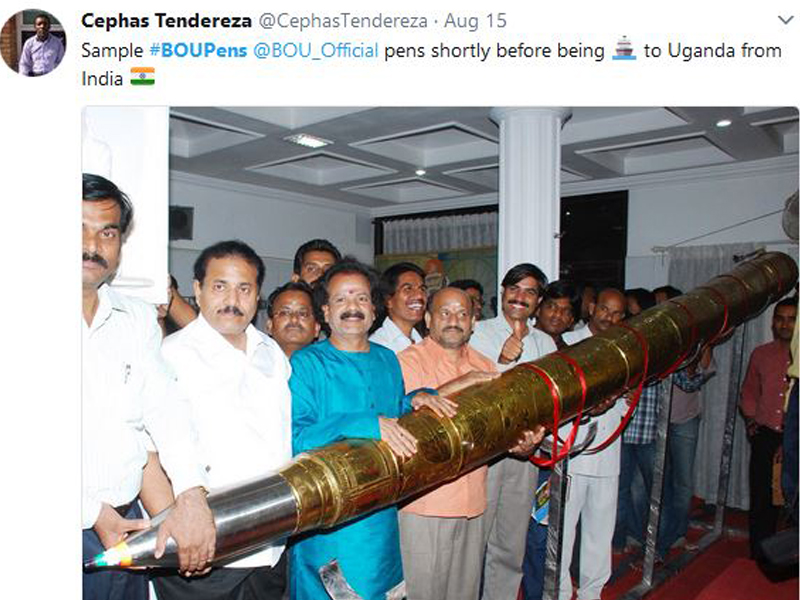 On Tuesday, Ugandans were left in shock as they woke up to disturbing news following revelations that, Central Bank of Uganda had spent Ug Shs 125 million on buying 350 pens to commemorate 50 years of service. According to our quick maths, each pen cost Shs 357,000 and according to majority of the Ugandans, they say this act is not worth it considering that our economy is still growing.

Social media users have since then bashed Bank of Uganda (BOU) with some taking it personal and declaring ‘war’ where as some took it for jokes as they posted funny memes on different social media platforms with Twitter being the one buzzing the most.

Here are some of the Tweets Chano8 gathered for the trending hash tag #BOUPens. Take a look.

The school might have only managed to buy 428 #BOUPens. pic.twitter.com/vlryY8kuea

When you realize the cost one #BoUPENs is more than Primary Teachers salary pic.twitter.com/nAYqrdDutE

Someone sold goats and cows to raise UGX 10 billion and you're still shocked by the #BOUPens #UgandaZaabu pic.twitter.com/jGFNgZaE9G

When you're so excited to use the #BOUPens that you forget your own signature😂😂😂 pic.twitter.com/I5KuwUYUiK

There is a possibility that these #BoUPENs can amend the constitution pic.twitter.com/5Ty5yAZ33O

The only Pen that can write on water #BOUpens pic.twitter.com/ANFVdmbYGN

Banange mukama yebazibwe. I had issues of rent, tuition, debts from even my boda guy until i picked a pen around BOU. Kati neyagala #BouPens pic.twitter.com/g5YT8V5vkl

U know how banks tie their pens on strings? If BOU had tellers, each pen wld be tied to a sniffer dog using an electrified chain. #BOUpens pic.twitter.com/oZkxQwQqxY

Okay these pens really do exist………….. but why if they got no rubber #BOUpens pic.twitter.com/Vp5MdAMJwT

A book that explains how to efficiently use the #BOUpens has been printed…… pic.twitter.com/36V95qHkmz

When he has one of those #BOUPens but his handwriting is still fake.
pic.twitter.com/fPj49CnjK4

The #BOUPens are flawless, they don't make spelling mistakes!