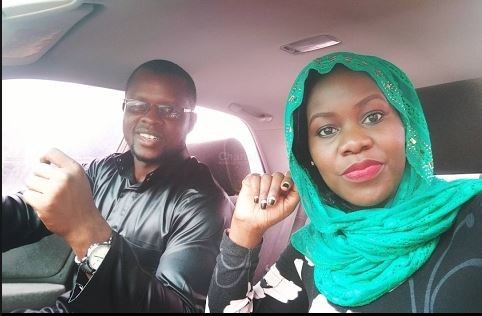 Media personality Faridah Nakazibwe is not a kind who likes over posting photos and videos of her hubby but over the weekend, she got Instagram users talking following a video of her and her husband sharing a fun moment

Faridah who likes keeping her privacy was in public display of affection with her husband Dr Omar Ssali whom she officially introduced to her parents some months ago. She shared a video of her and her husband seated in a car as they danced and and sang to singer Rema Namakula’s love song titled ‘Tikula’.

In the video, Faridah looks like one possessed by a serious love feeling. She is seen miming the song as her hubby joins in by pulling rare dance moves which he later stops to concentrate on what Faridah who is all blushing and dying of sweetness because of her her man’s presence.

Meanwhile, ‘Tikula’ is a song whose lyrics tell a story of a lady who is possessed by a burning love feeling which she wants her man to cool down and  going by the fact that Faridah dedicated this song to the hubby, that was a perfect way of letting her feelings known to him.

A few months ago, Faridah took to social media where she attacked fellow TV presenter Justin Namere over reasons that she was in a process of snatching her man Dr Omar Ssali.Their chicken fight over a man was a hot public topic and at some point, Justine dragged Faridah to the courts of law claiming that Faridah had defamed her to highest level.