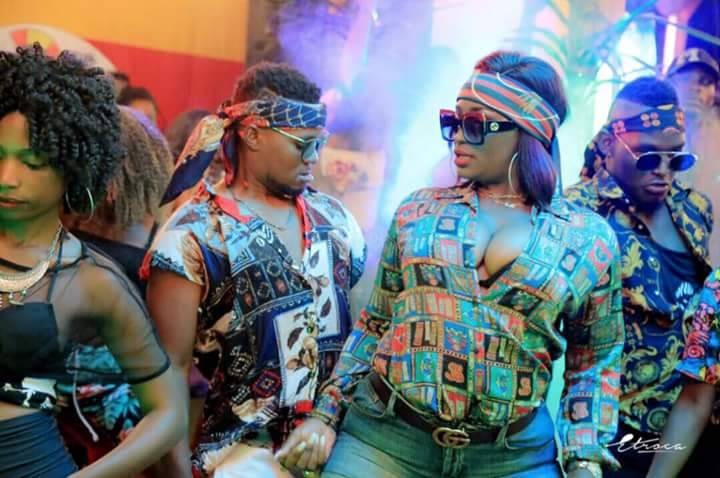 We have heard and danced to several of her tunes from the time she got introduced to the music scene. She also hasn’t stopped giving her fans more of what she has to offer when it comes to music. We are comfortable to say that the song ‘Musawo’ catapulted her for greater heights and from then Winnie Nwagi marked her position in the top notch musicians with her record label being Swangz Avenue.

She has a fresh video she recently dropped for her song dubbed ‘Fire Dancer’ alongside Nigerian Afro-Dancehall singer Slim Prince.

Winnie who acts as the sexy girl is also not afraid of telling the dude about her hotness which can’t be compared to any girls’ and how she already knows that the boy has already fallen for her.

Basing on the fact that the song falls in the Dancehall genre, the 3 minutes and 50 seconds video shot by Swangz Video and directed by Marvin Musoke clearly shows people having fun and dancing to the music with artistes’ performances at what seems like a music show.

The video starts with a scene of the crowd lead by Nwagi dancing to live Dj mixes ahead of the performer’s arrival who is none other than Slim Prince. Finally he steps in and is handed a microphone by the MC a thing that excites the crowd even throughout his performance.

His performance throws the crowd in serious frenzy as we see people pulling some uniform dance moves and also see some boys and girls holding in each other in a cozy way. This is really a fun filled show as everyone is having fun in any way they feel like with some playing some board games while sipping on drinks of their choice.

The video director then shifts more attention to Winnie Nwagi who is wiggling her body and more shots show her and Slim Prince closer before she twerks her body for him to appreciate. To represent for their countries, there is a shirtless dude seen in the crowd with the Nigerian flag painted on his body and the Ugandan Flag is hanged on one of the walls of the dancing hall.

The song boasts of hard Dancehall beats with big base line which intrigues one to dance as well as the video which is full of dance strokes which can leave you seated down.